Why Do Browntail Moth Hairs Itch?

Why Do Browntail Moth Hairs Itch? 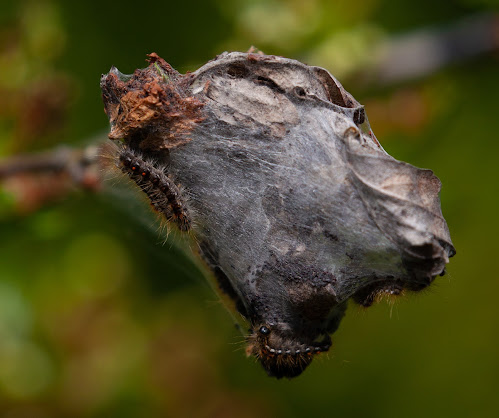 Warning: If you currently have respiratory issues from these hairs, get off the web and dial 911.

I got a few of these browntail moth hairs on me and wondered what all of you wonder. Why does this cause my skin so many issues?

Is it just mechanical? Little sharp browntail hairs stabbing into your skin. Ow. End of story?

"The present findings are consistent with the idea that the nettling hairs may serve as microneedles from which irritant substances may be liberated when penetrating into the skin, and that the resulting inflammatory reactions are attributable to combined mechanical and toxic effects."

So even as the skin is healing, the toxic effects happening under your skin are continuing.

Oh, I know. Roll your eyes. "Toxins" is a very broad term. So what are we dealing with in these little hairs?

I found this wonderful old manuscript on the browntail moth when it first emerged in Boston in 1907.
The shorthand is that heat inactivates the enzymes that otherwise cause our own blood to become the poison. The barbs themselves contain the poison, and inject it into us slowly, causing dermatitis.
From a treatment standpoint, this is less helpful than the fact that the material inside is acidic in nature, so that the application of a base like sodium bicarbonate might give some relief. But more importantly, the issue is that the barbs are releasing a poison into the body like a bee sting, so that the material needs to be disseminated without causing a systemic problem. The application of heat to the area along with baking soda is a possibility.

But can we know more about this poison?

From an outbreak in the Netherlands in 1982, we have this analysis: "The venom consists of a mixture of histamine, trypsin, phospholipase, and several other enzymes." They go on to helpfully acknowledge: "even after several decades these nettle hairs can cause a skin reaction, which was demonstrated by Oudemans (1901) with an 18-year-old presened caterpillar"
Another wonderful article from 1914 describes the pitchfork of pain that is the browntail moth hair. It has three sharp points, and grows larger as it moves away from the caterpillar's body. Baking the hairs at 115 C (239 F) kills off the poison inside, while lower temperatures do not. Dunking the hairs in alcohol did nothing, but five weeks in alcohol seemed to do the trick. Acetic acid (vinegar) and even hydrochloric acid did nothing, but KOH and NaOH at 1% antidote the poison. Since KOH is lye, you wouldn't want to use that or NaOH. But NaHCO3 (baking soda) might be helpful?
Why are we not finding more on browntail moth poison more recently? Well, according to Maine government back when they started in Maine there was a huge burning of webs and a great hullabaloo generally. But in the 1920's the browntail moth population collapsed (#save the browntail?) possible due to a fungus. They survived on the islands of Maine and in 1988 started spreading again. This time we sprayed them with heavy pesticides which were controversial and not terribly effective. The population collapsed again in 2005 from wet springs and likely fungus again. But it's been spreading ever since. The problem can be from April through August. But according to the Maine State report the dry hairs can be poisonous for 1-3 years later. So no time of the year is really safe.

First things first. Topical treatments will deal with things topically and locally. If that works for you, great!
Here are some possible additional treatments that have not been done in trials.
The poison being injected into your body contains histamine. So systemic antihistamines (the same ones you would take for an allergy) would be a possibility, and steroids if the reaction is severe (study on a similar caterpillar here and here).
Very high heat kills the poison, breaking down the enzymes. But even lower heat will move the poison throughout the body rather than having it simply be at one tiny, itching location. Warning! If you move that much histamine around without antihistamines in the system, you could be in trouble. Time to talk to your doctor about systemic steroids if you have a really bad outbreak.
Bases antidote the poison, but strong bases burn the skin. A lesser base like baking soda may help.

Possible treatments to talk about with your doctor:

Local and systemic heat. To distribute the poison while possibly making it less effective. It would be used as needed.
Systemic antihistamines. Directly opposing the histamine in the poison. Use with a doctor's oversight, please.
Topical antacid: baking soda. To nullify any poison still in the hairs. Applied and left on between heating the skin.
Alternative Things That Aren't Likely To Harm You:
Consuming local honey produced during the summer months. The honey contains tiny amounts of many allergens and may help desensitize your body.
Homeopathic: histaminum hydrochloricum in a low dose could prime the body against the histamine. Other remedies would be thuja, ledum, and apis. My favorite anti-itch remedy is psorinum, but it is harder to get over-the-counter.
Anti-inflammatory diet: Links on my website.
My patients can find things that might be helpful at Wellevate.

Popular posts from this blog

What Is the Deal With Fopobiacne Secrets? Scam? Sadly, Yes.

October 07, 2019
I just had another "random" person mention Fopobiacne Secrets on my comments page today. Since it seemed spammy, I deleted the comment. But it made me think that Fopobiacne Secrets is paying people to spam the internet with this product. So I decided to go looking and see what's going on. First, going directly to their official website is a weird experience. It's not a secure site, and hasn't been verified online, so it feels sketchy (I know, I use google, and I do so because they're verified and have the best security on the planet).  Most product pages feature a one page click through process. You see the product, read the reviews, and buy or pass on the product. Not on the Fopoiacne Secrets page. The top of the page warns "This is not for everyone!" then in the text they say, " Fopobiacne Secrets  is the best choice for you." So which is it? Not for everyone or the best choice for everyone? If you press the continue button, you
Post a Comment
Read more

Godaddy and the Russian Mob, or why maloneymedical.com is now a scam.

March 26, 2019
I apologize to those of you who have been confused by my sudden interest in promoting Viagra. It’s not me. It’s the Russian Mob using maloneymedical.com to rip people off. Yes, I’m taking legal action. But the law is slow and people are getting hurt and confused. (My current website is naturopathicmaine.com , but if you’re confused, just email me. Or use your phone for what it was intended and give me a call.) Please don’t assume I’ve decided that erectile dysfunction is my guiding passion going forward. Sometimes the truth is stranger than fiction. In November of 2017, I stopped paying on maloneymedical.com . It was an old domain, and I foolishly thought because it had my own name in the title it would be worthless to anyone else. How wrong I was. Godaddy auctioned off my domain to the highest bidder. He took maloneymedical.com , added a fake copy of my old website using Wordpress, hosted the new fake website on Amazon, and tried to hide himself by using Godaddy’s evil twin D
Post a Comment
Read more

The Singularity and Dementia: When Can We Upload Our Brains?

March 25, 2019
I just finished writing a book on memory and dementia, and I have some good news and bad news. The good news is that we can do something about dementia. It's easy, straightforward, and we've only started to get a handle on it in the last ten years. The bad news is that we aren't going to be uploading our brains into computers any time soon. I know, smart guys in the tech world wander around talking about the singularity, the moment when computer brains will surpass human brains. They're wrong. Using existing technology, computers cannot equal a human brain. Not even close. To reach the power of the two pounds of wet, pink sponge in your head, we would need a thousand times the existing world wide web. All of it, in every country in the world, now a thousand times that computing power. Why? It's pretty simple. A computer is based on binary. An on/off switch like a light switch. It's either on or it's off. So a supercomputer is a huge room filled with
Post a Comment
Read more

Christopher Maloney
Doc here. Been an ND since 2002. I've been writing for almost two decades. My journey has been to despair and back, and I'm glad to meet you at any point in your own. There are lots of ways of finding me. The easiest is via naturopathicmaine.com, which currently transfers to my google site. https://sites.google.com/view/naturopathicmaine/home My books can be found at: https://amzn.to/2RXFftP I have another wordpress blog: https://alternativendhealth.wordpress.com/ Pinterest: https://www.pinterest.com/maloneynd4/ Twitter: https://twitter.com/naturopathealth Facebook: https://www.facebook.com/drchristophermaloney/ LinkedIn: https://www.linkedin.com/in/dr-christopher-maloney-2100a221/ Instagram: https://www.instagram.com/maloneynd4/ Quora: https://www.quora.com/profile/Christopher-Maloney Tumblr: https://www.tumblr.com/blog/christophermaloneynd